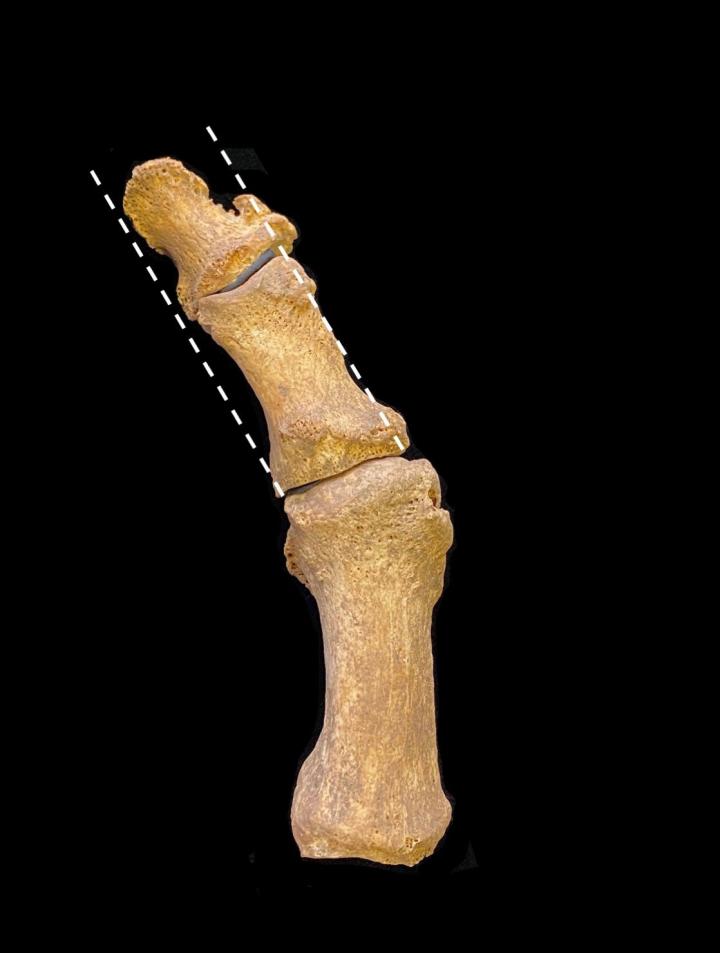 The British have suffered for their fashion for centuries according to a new study suggesting that a vogue for shoes with a pointed tip led to a sharp increase in hallux valgus of the big toe – often called bunions – in the late medieval period.

Researchers investigating remains in Cambridge, UK, found that those buried in the town centre, particularly in plots for wealthier citizens and clergy, were much more likely to have had bunions – suggesting rich urbanites paid a higher price for their footwear in more ways than one.

A University of Cambridge team also discovered that older medieval people with hallux valgus were significantly more likely to have sustained a broken bone from a probable fall compared to those of a similar age with normal feet.

Hallux valgus is a minor deformity in which the largest toe becomes angled outward and a bony protrusion forms at its base, on the inside of the foot.

While various factors can predispose someone to bunions, from genetics to muscle imbalance, by far the most common contemporary cause is constrictive boots and shoes. The condition is often associated with wearing high heels.

Archaeologists analysed 177 skeletons from cemeteries in and around the city of Cambridge and found that only 6% of individuals buried between 11th and 13th centuries had evidence of the affliction. However, 27% of those dating from the 14th and 15th centuries had been hobbled by longstanding hallux valgus.

Researchers point out that shoe style changed significantly during the 14th century: shifting from a functional rounded toe box to a lengthy and more elegant pointed tip.

In a paper published today in the International Journal of Paleopathology, the team from Cambridge University’s After the Plague project argues that these “poulaine” shoes drove the rise of bunions in medieval Britain.

“The 14th century brought an abundance of new styles of dress and footwear in a wide range of fabrics and colours. Among these fashion trends were pointed long-toed shoes called poulaines,” said study co-author Dr Piers Mitchell from Cambridge’s Department of Archaeology.

“The remains of shoes excavated in places like London and Cambridge suggest that by the late 14th century almost every type of shoe was at least slightly pointed – a style common among both adults and children alike.”

“We investigated the changes that occurred between the high and late medieval periods, and realized that the increase in hallux valgus over time must have been due to the introduction of these new footwear styles,” said Mitchell.

First author Dr Jenna Dittmar, who conducted the work while at Cambridge, said: “We think of bunions as being a modern problem but this work shows it was actually one of the more common conditions to have affected medieval adults.”

The remains came from four separate sites around Cambridge: a charitable hospital (now part of St John’s College); the grounds of a former Augustinian friary, where clergy and wealthy benefactors were buried; a local parish graveyard on what was the edge of town; and a rural burial site by a village 6km south of Cambridge.

Researchers conducted “paleopathological assessments”, including inspecting foot bones for the bump by the big toe that is the hallmark of hallux valgus.

They found a sliding scale of bunion prevalence linked to the wealth of those interred on each site. Only 3% of the rural cemetery showed signs, 10% of the parish graveyard (which mainly held the working poor), creeping up to 23% of those on the hospital site.

Yet almost half those buried in the friary – some 43% – including five of the eleven individuals identified as clergy by their belt buckles, carried the mark of the bunion.

“Rules for the attire of Augustinian friars included footwear that was ‘black and fastened by a thong at the ankle’, commensurate with a lifestyle of worship and poverty,” said Mitchell.

“However, in the 13th and 14th centuries it was increasingly common for those in clerical orders in Britain to wear stylish clothes – a cause for concern among high-ranking church officials.”

In 1215, the church forbade clergy from wearing pointed-toed shoes. This may have done little to curb the trend, as numerous further decrees on indiscretions in clerical dress had to be passed, most notably in 1281 and 1342.

“The adoption of fashionable garments by the clergy was so common it spurred criticism in contemporary literature, as seen in Chaucer’s depiction of the monk in the Canterbury Tales,” said Mitchell.

Across late medieval society the pointiness of shoes became so extreme that in 1463 King Edward IV passed a law limiting toe-point length to less than two inches within London.

The majority of remains with signs of hallux valgus across all sites and eras within the study were men (20 of the 31 total bunion sufferers). The research also suggests that health costs of foot fashion were not limited to bunions.

Dr Jenna Dittmar found that skeletal remains with hallux valgus were also more likely to show signs of fractures that usually result from a fall e.g. those to upper limbs indicating an individual tumbled forward onto outstretched arms.

This association was only found to be significant among those who died over 45 year old, suggesting youthful fashion choices came back to haunt the middle-aged even in medieval times.

“Modern clinical research on patients with hallux valgus has shown that the deformity makes it harder to balance, and increases the risk of falls in older people,” said Dittmar. “This would explain the higher number of healed broken bones we found in medieval skeletons with this condition.”

So, who should you believe? Should you believe all the testimonials on the sites selling them. They can be fake. Lots of forum and social media posts ask if the work (eg here and here). Some podiatrists have tried to address the issue (eg here).

In these situations, you need to defer to what the unbiased published and peer reviewed scientific research says. Unfortunately there is not a lot to go on here as its not exactly a popular topic for researchers to look into!

There is one study that has looked at this and, yes it showed that bunion correctors do work at correcting bunions. However, it was only done over a 3 month period and its showed on average a 1 degree improvement per month in the angle of the hallux valgus. That is a reasonable outcome. What they study did not show is that if there is further improvement beyond the three months or if you need to keep wearing them to maintain the improvement. Maybe the improvement reverses when the corrector is no longer used.

There are lots of unanswered questions regarding the research on these, so unfortunately opinions is all that is left. There are opinions (eg here) that even if they do not actually correct the bunion or hallux valgus, they are still useful as a physical therapy type intervention to stretch and keep the joint mobile. This is a reasonable opinion and use of these bunion correctors.